For those who didn't know April 30th was declared International Jazz Day by UNESCO in 2011. So
what is International Jazz Day and what are we celebrating? The music? Or a form of cultural diplomacy that pays lip service to the role that jazz has played in soft diplomacy - beyond which usually lie social, economic and political influence? Not wanting to sound completely cynical, though I can help, when confronted with the 'sugarcoated' messages. On the  International Jazz Day website  there's a nice quote from jazz ambassador Herbie Hancock,

"Jazz is really about the human experience. It’s about the ability of human beings to take
the worst of circumstances and struggles and turn it into something creative and constructive.
That’s something that’s built into the fiber of every human being. And I think that’s why people
can respond to it. They feel the freedom in it. And the attributes of jazz are also admirable. It’s
about dialogue. It’s about sharing. And teamwork. It’s in the moment, and it's nonjudgmental."

Of course these noble sentiments aren't offensive as such. How could any reasonably- minded person be against mutual tolerance, unity and peace, equality, etc. My unease is about the way jazz has been co-opted as a soft power tool. Jazz's role in cultural diplomacy paved the way for America to dominate popular music globally, which presented an interesting paradox in 1950s and 60s. As the music that originated with an oppressed minority struggling against racism and inequality, jazz was used to represent American culture abroad by the US State Department - although racial segregation existed in some states in America. Jazz royalty / heroes were appointed jazz ambassadors to carry the message of 'freedom' that jazz symbolized, which became attached to American propaganda about  the 'American way of life' and the value of democracy during the cold war period. The contradiction did not escape the musicians - Charles Mingus, commented that if jazz was good enough for the overseas audiences of the state department then why wasn't it good enough for young people at home. Back then cultural diplomacy was clearly about the American experience of freedom with its modernity idealized. It wasn't just Jazz musicians but also Basket ball players, and other entertainers whose auras were exploited in this way. 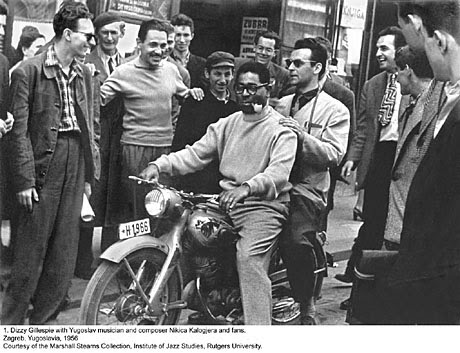 Is the creation of International Jazz Day a revival of the jazz ambassadors of the 50s and 60s? Jazz and 'freedom' go together like a horse and carriage. But it gets tricky because 'freedom' was shaped by particular ideological forces and the US State Department that made the American way of life and 'democracy' appear interchangeable. Looking at the current language used to talk about 'jazz': 'jazz is a democratic music'; 'jazz allow people to express their individuality; 'jazz is a vector of freedom of expression', are these sentiments that different? Weren't these also the symbolic messages jazz musicians carried with them behind the iron curtain? Perhaps the really interesting part is what has happened to the American dream and America's 'moral' authority in the world today. Wasn't this enduring sense of 'freedom' - the freedom to make money, which accommodated the rise of rapacious bankers? For me engendering an appreciation of the music art form sometimes seems to be a footnote by comparison.

Herbie, tells us,"We all want to live in a jazz world where we all work together, improvise together, are not afraid of taking chances and expressing ourselves." I'm not knocking Herbie because he's right about one thing which is jazz is about the human experience and to put it in a less sugary way, that experience was / is about hope, possibility and at times losing oneself. So what should one do on International Jazz Day? Listen to Jazz; buy some jazz, play some jazz; engage in dialogue about jazz; find something jazzy to do...

Herbie Hancock: The Norton Lecturer in 2014'The Ethics of Jazz'  - in 6 parts. Vijay Iyer and Homi Bhabba make an appearance.

The History Of Jazz Piano In 11 Minutes
by Patrick Jarenwattananon

Check out Babel Label on Bandcamp
Posted by katan500 at 11:37 AM No comments: Links to this post

Jazz Projector is a night of jazz related films hosted by Dr Nicolas Pillai (University of Warwick). Since most of these legendary musicians are dead it is perhaps the closest we can come to experiencing them live. The two short films selected for the next Jazz Projector event are: Jammin’ the Blues (1944) Dir. Gjon Mili, and Blues for Joan Miro (1966) Producer Norman Granz. The first conjures up classic images of Lester Young and others, while the second film is part of an uncompleted Ellington film project. The evening concludes with a 1965 Jazz 625 recording of the Thelonious Monk Quartet. 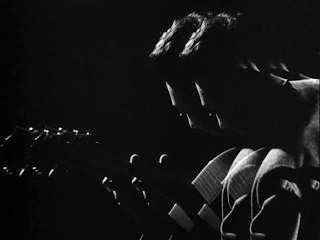 Features a jam session with some of the most outstanding African-American
jazz musicians, including Lester Young.

There was one white musician present, Barney Kessell on guitar, who appears as a shadowy silhouette figure in a deliberate attempt to make him unidentifiable as a white man jamming in the company of black musicians. 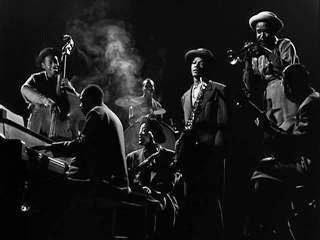 The noir-ish ambiance is created through the dim lighting, and wisps of cigarette smoke evoking the night club. To come to think of it the chairs look the same as the ones upstairs in the Vortex Jazz Club. For 1944 the film must have seem very avant-garde with its use multiplied images and abstract treatment of instruments and their players. 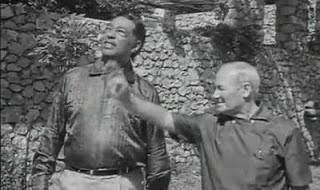 In this film Duke Ellington and his Trio play for Joan Miró in the South of France. Miro takes Duke on a guided tour of his sculptures while chatting away in French.The two men couldn’t understand a word the other said, but seemed contented to show each other their work. You see Miró standing, leaning on one of his sculptures behind Duke looking on as he plays The Shepherd. 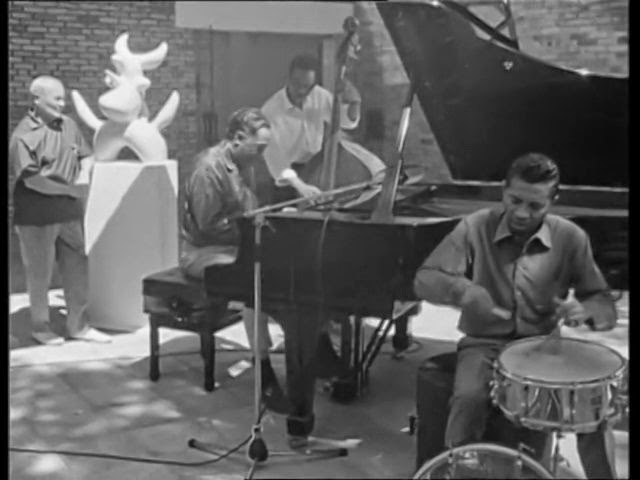 Hope to see you there and check out the food while you're there...