Based on CDs available at the shop besides the Vortex.
To appear in Jazzwise in April.
Posted by Babel blog at 8:35 AM No comments: Links to this post

Where is jazz played in London?

Seb Scotney's LondonJazz blog has an ongoing investigation about why the Royal Opera House stopped putting on jazz. I remember seeing some lovely gigs there. I understand that there have been some good quality rock gigs there, such as Snow Patrol. So it's potentially just the sort of place, in my humble view, where jazz could and should be occurring. High quality, accessible etc.
Unfortunately, they have stopped, apart from performances "mainly around festivals". Due to concern that it might interfere with other areas of programming and that they no longer fitted in with our artistic vision. Hmm. And as if jazz only exists at festival times?
The man in question, Christopher Millard, flannelled about a bit but couldn't clarify. What is the artistic vision of the Royal Opera House that it doesn't include some of the most innovative musicians around? Maybe they should ask Mark Anthony Turnage who ha written extensively for jazz musicians, such as Dave Holland and John Scofield as well as explaining that he is greatly influenced by Miles Davis.
We suggest that you ask more of the Royal Opera House, email Christopher Millard, Director of Press and Communication on christopher.millard@roh.org.uk
Ian Carr, R.I.P. Always elegant, in his music, in his writing and in his appearance. Thank goodness he was still aware enough when the jazz world gave him accolades at BBC Jazz Awards and Parliamentary Jazz Awards. He gave encouragement to many and seemed to have time for all.
Posted by Babel blog at 9:53 AM No comments: Links to this post

The LondonJazz blog draws attention to the fact that I am going to get an honorary degree from the Royal Academy of Music. I shall sheepishly accept the Hon A-RAM. When I initially heard about it, I had hoped that it was for the Vortex itself. I find it a cool concept to make an inanimate club seem animate.
Meanwhile. I discover that there are only 300 independent record shops left in the UK. Add to that HMV etc. that probably means not more than 500 in a country of 60 million! That's why digital becomes so important. Meanwhile, when I put CDs on the counter at the Vortex, everyone goes in to have a look. Force of habit? Frustration that there is nowhere else to look nowadays? Who knows? But the breadth of interest is shown by a person who buys Lenny White and Ellery Eskelin CDs at the same time.
Posted by Babel blog at 11:09 AM No comments: Links to this post

New range of CDs in the shop and coming online

The Babel shop now has a selection of CDs from pi, AUM Fidelity, Camjazz, Basho, ACT and Winter & Winter. As well as the full Babel catalogue

These include the new John Taylor solo CD "Phases", as well as his other Camjazz CDs and those of Kenny Wheeler.

I have also picked up some interesting CDs from Czech Republic. There is also a £2 bargain bin, with some of the remnant CDs from the Vortex. (All proceeds from these sales go direct to the club.)

Come down to check it out.

9 Gillett Square, London N16. Next to the Vortex.
Core opening hours: Thursday-Saturday 3-11 p.m.
Other times: a small selection for Vortex gigs when I'm there

Otherwise, email me on shop@babellabel.co.uk if you have any particular order. You can specify when you want to collect.
Posted by Babel blog at 9:17 AM No comments: Links to this post

Banks and the major players in music industry - the parallels?

Having had a period in both worlds - my initial calling was as an "economist" - I am trying to draw parallels between the decline of the banks and that of the majors in the record industry.
It's difficult and I think that this will be an evolving topic over the next period.
So far, I have laid both sides down to technology and the ignorance regarding it. The bank bosses blindly followed the findings of rocket scientists who could come up with an apparent alchemical way of turning low quality housing in Hartlepool into squillions of pounds for bank bosses.
The major record companies fought it on the other hand, not realising what could happen to their revenues. They fought Napster, they have tried to fight file sharing. Funnily enough it was a computer company, Apple, who showed them the way forward, with itunes. Unfortunately for them, just as there were beginning to be revenues appearing from this side, the recession struck big time.
So the contrasts are probably greater than the similarities. Other contrasts - music has a better quality underlying product, even if it seems costly, than the banks had. Music development is a long-term phenomenon. By contrast, banking, certainly in the past few years, has been a short-term fix.
Both have been equally unable to learn from history or from their mistakes.
Certainly there will be different solutions to the problems. When Guy Hands tried to solve EMI as one of short-term financial returns, he failed miserably.
I just feel that the jazz world probably has the answers for the music industry. There are people still in the majors who believe in music.
The advisers to the governments on the banks themselves are implicated and trying to save their skins.
Posted by Babel blog at 10:32 AM No comments: Links to this post

Keep going to the gigs 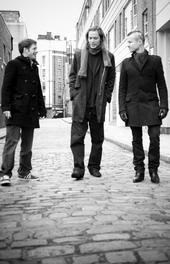 This weekend the Vortex held a festival for the dynamic Loop Collective. The club was packed for 4 days, with festival promoters from France such as Jazzdor in Strasbourg and journalists including Michael Ruesenberg from WDR in Cologne.
14 bands over the period, including BBC Jazz Award winners Fraud, Gwilym Simcock as a great sideman with Sam Crockatt, Blink, Outhouse......
I made the introductions and spoke to many of the delighted fans. Several even made clear that they found a Valentine's Day in a packed jazz club listening to these band a highly romantic experience. One called Phronesis "pure sex on stage"! Do you agree?
But I forgot to say one important thing. And that is, that people should not think that going to a day of a festival is enough. They need to keep going to gigs throughout the year, wherever and whenever they are. The quality of the music here is amazing and even quite accessible. That's what the festival showed. For bands: no need to underestimate your audiences. For audiences: the music's out there. Go and find it.

Posted by Babel blog at 1:21 PM No comments: Links to this post

The Vortex is running its first monthly music market on 22 February from 1-5 p.m.

"This sounds like a rather pleasant way of returning the social dimension to record buying."
(JazzUK, February 2009 editorial)

With shops disappearing and chances for jazz labels to get their music out there declining, this is a way of solving the problem?

To display contact oliver@vortexjazz.co.uk for more information.
Posted by Babel blog at 9:58 AM No comments: Links to this post

More jazz to find or miss

Following on my previous blog about finding jazz hidden away all over the place in London, I return frustrated to have missed a performance of Sonos E Memoria, with Sardinian musicians led by trumpeter Paolo Fresu of which here is Part 1

Misha Alperin is in town soon on 18 February at Kings Place (overlapping with Uri Caine in Greenwich). There's also an interview with Mikhail Rudy who's doing the show with him.
Also watch out for Chris Dave at Charlie Wright's on Wednesday next week. Though I'll be enjoying Liam Noble at the Vortex launching his divine Brubeck album (And of course selling it at my shop!)
Here's some of Chris Dave with his trio.

Posted by Babel blog at 11:37 PM No comments: Links to this post

Progrock seems to where many of the musicians ended in the late 60s and early 70s ended up who didn't want to go into pure rock and didn't feel at ease in the jazz world. Intriguingly, musicians such as Robert Wyatt and Bill Bruford have hooked up more with the younger jazzers in recent years (e.g. Earthworks).
The influence of the classical and intellectual has permeated jazz more and more in recent years, especially as young musicians are able to study in the conservatoires. It also has a common feature with much of jazz today (as pointed out in an article by Laura Barnett in the Guardian) that it has been a male dominated world -even if changing. Though she did forget to mention that the Vortex has an all-female big band (The Vortex Foundation Big Band) with a Babel release!
Posted by Babel blog at 12:34 PM No comments: Links to this post

How to run a jazz club?

Through Seb Scotney, of the LondonJazz blog, pointed out an article about Ronnie Scott's and its present general manager Simon Cooke in the Times recently. Certainly it shows that there is a different mentality that has to run a jazz club in the West End, with high rents and overheads, in contrast with Dalston. Whether it is true to the "spirit" of the music over there is another matter. But perhaps there is no choice? Running a jazz club is a balance between creativity, the musicians and the audiences. They have to feel at home, because that, in my view, generates the buzz that makes a jazz gig special. Given the "looseness" that much jazz has live, it is essential that the ambiance is right. If the club is too prim and proper, then this is lost. "Scruffy", a word used insultingly by Simon Cooke, is not necessarily a negative. As long as it is controlled scruffiness.
The Vortex is having a great period in terms of music and audiences. Over 300 people through the door on Friday, Saturday and Sunday. And not with an "easy" range of music - Buffalo Collision (Tim Berne, Hank Roberts, Ethan Iverson, Dave King), Carol Grimes (returning to live performance after a lay-off through injury after 6 months), London Jazz Orchestra doing the music of Pete Hurt and our Vocals@Vortex night. Tonight, weather willing, it's Yaron Herman and Curios.
It's been, and always will be, very much a case of evolution not revolution. A lot of patience, such as a late night celebration with Carol after the gig, meaning that I got home at close to 3 a.m. A lovely crowd of volunteers who believe in the club. The continued involvement of David Mossman, as founder and everything else.
It was so flattering that Rod Youngs, playing for the singers' night, was so thrilled by the night that he gave me a warm embrace on departure, insisting that we get an extension built asap!
By getting this right - and having a patient landlord to ensure that this occurs - the club is ready to survive the slings and arrows of the recession that we are now in.
So is there a correct way to start and run a jazz club? I don't think so. There is certainly no Jazz Club 101 course at business schools. Long may that be the case. Adaptability, flexibility, creativity.
Posted by Babel blog at 11:27 AM No comments: Links to this post