It’s not far from the parts of the brain stimulated by art and by music. Perhaps that's why artists and musicians seem so often to work hand in hand. Most obviously in the jazz scene here in London as an artist is Gina Southgate who has a regular display at the Vortex.
A third leg of this creative stool is maths/science. Eloquently put by the book “Gödel, Escher, Bach” by Douglas Hofstadter. And there is an evocative subtitle “An eternal golden braid”
Very rarely do all three come together. But very frequently there are two out of three, such as my own awareness of Escher and Bach, but not Gödel. Einstein was a violinist, as was Paul Klee and many artists passim who have become musicians, with two springing to mind being Terry Day and Leafcutter John. The art school movement of the 60s has a lot to answer for. Miles Davis could paint (of sorts). Evan Parker was originally a botanist, and Jake McMurchie (who leads Michelson Morley) studied maths.
My usual immediate reaction to the influence of science on art is that there is a strong precision involved, such as meticulous anatomical drawings by the like of Leonardo. Jazz musicians are usually logicians, solving problems of how to make music out of chord sequences, but also how to integrate with the musicians around them, as well as being able to assert their individuality. 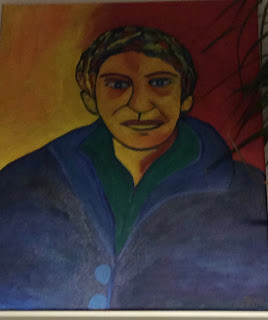 My thoughts on this have been further influenced by my contact with mathematician turned artist Aurelie Fréoua. She uses terms and concepts such as ‘order’ and ‘chaos’, homing in on the spiral and on colour. But there is something which hooks up to jazz and even improvisation. Her work seems to have movement to it. Her spirals have intriguing ways of moving around colours, by the way that the paint is applied. While her abstracts start with her working from a wholly blank canvas, going with the flow, before actually recognising imagery which emerge from her subconscious. So there is an element of improvisation.
Like any good artist, she is fearless, though well aware that her work needs to communicate.
This was the case in a portrait of me that she has done. Completely transforming my complexion, clothing and hair but getting over her own vision of me!


She has been developing in a parallel way to many musicians whom I know and using the same attitude. I wonder if she will respond as much to the music as a stimulus to creativity, in the way that many musicians have responded to art?