April at the Vortex 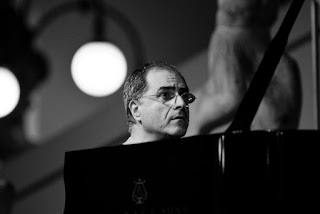 While the programme of the club is ongoing, there are always a few highlights and connections that seem to spring out every month.
This month, the programme is topped and tailed by gigs involving two of the most influential European pianists in jazz.
Enrico Pieranunzi.  Comes in on 4-5 April. It's a privilege that Enrico's London base has become the Vortex. We have had a trio with Geoff Gascoyne and Enzo Zirilli as well his Racconti Mediterranei involving the gorgeous clarinet of Gabriele Mirabassi.
For his concerts this time, half will be with a trio involving Andrea di Biase and James Maddren (and adding Fulvio Sigurta on 5) and the other half will be him playing solo. His touch is very classic, so it's not surprising when I found an album that he has done of Scarlatti sonatas.
At the end of the month, we have Bobo Stenson, playing with Martin Speake. They recorded together for ECM about a decade ago. Bobo has, along with JT, defined European piano identity for Europeans. They last played together at the Vortex in 2009 and you can see the result here.
Put 28 and 29 in your diaries.
But it's a month with all sorts of other things that one can be excited by.
On 12th, the Deep Whole Trio's gig coincides with Paul Rogers' 60th. So come to the party!!!
We are lucky that a couple of specials are there to co-ordinate with Stewart Lee's curated All Tomorrow's Parties festival. Namely on 10th, Alan Wilkinson's trio will play early evening and on 24th, we'll have Tania Chen.
I look forward to the gig on 10th in the evening. Terry Day seems to be playing better than ever at present. And it'll be great to have Tom Challenger and Shabaka Hutchings sparring, along with Jonathan Impett on trumpet (who was on the Babel albums by Amit Chaudhuri) and Peter Urpeth coming down from the Hebrides.
21st - James Allsopp's Organ Trio. This guy is always a blast. And he now seems to be becoming a member of Pigfoot. Let's see for sure on 30th, when the band celebrates 1972, a year of good and bad no doubt.
But then I can't forget that Stan Sulzmann is back as is Carol Grimes and we can hope that Gilad Atzmon will be focussed on his horn playing, where he is uncontroversially top notch. Good to hear him taking on Coltrane. Denys Baptiste did this a few weeks ago and it led us into the stratosphere.
We, at the Vortex, also take certain young musicians to heart. One such is Camilla George, who is back on Wednesday. A lovely saxophonist in the making, with pianist Sarah Tandy firing things up behine.
Anyway, as I called the month 'topped and tailed by two great pianists', so too this blog post. 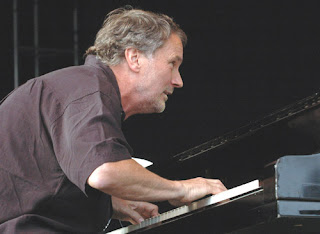