May at the Vortex 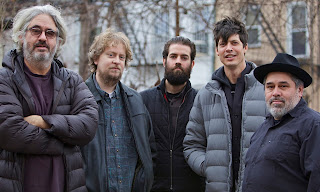 Some great highlights as ever at the Vortex in May.
It starts with Tim Berne's latest version  of Snakeoil, now up to a 5 piece for two nights on 1 and 2 May.
Elliot Galvin then previews the material from his upcoming trio album on 3 May. There will also be copies available of his new duo album with Mark Sanders, which won't be formally appearing on Babel till September.
More great pianists during the month. (I am a sucker for them!) Perhaps the one we see/least is Lucian Ban on 12th, in duo with Mat Maneri.
Barry Green (4th) John Law on 5th; Marco Marconi (11th) Tom Cawley with Trio Red (17th); Pat Thomas (19th); Sam Leak and Bruno Heinen both playing solo (22nd) and ending with more solo (and quartet) from the marvellous Huw Warren (27th). And not forgetting Alexander Hawkins playing with Evan Parker (26th).
Gilad Hekselman, who has become one of our favourites, is back with Petros Klampanis on 29th.
Last but certainly not least, do check out the stars of the future with the Royal Academy of Music finals students on 30th and 31st.
Meanwhile Christine Tobin is back for two nights on 23 and 24 May (along with another piano genius Steve Beresford) in Brian Eley's special show about Alzheimer's.