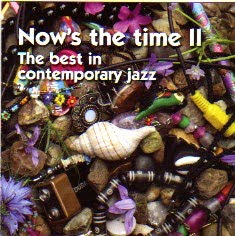 A special launch event for the new CD compilation 'Now's The Time II' (Vortex Records) will take place in the Clore Ballroom at the Royal Festival Hall next Friday 21 August starting at 5.30 p.m.

Loz Speyer, Babel artist Julie Sassoon and Jason Yarde are amongst those performing live and Kevin Le Gendre, who compiled the album, spins the tunes for this extended night of top free music.

The album features a superb set of contemporary jazz that covers everything from fusion to avant-garde and all points in between. As John Fordham wrote in the Guardian: "...... a rich contemporary mix with strong dancefloor underpinnings. **** "

This is the second Vortex release, following the successful Mercury-nominated Knee Deep In The North Sea by Portico Quartet, and is in the Vortex tradition of encouraging people towards what they might not know so well!!


The album has been compiled by broadcaster, jazz journalist and DJ Kevin Le Gendre from the best of his sadly missed 'Now's The Time' BBC London contemporary jazz radio show. AS he writes in the sleeve notes: "Improvisation, the overwhelming desire to pass comment on a given musical statement, to subtitle the title, has its place in any jazz school of thought - be it bebop, avant-garde, third stream or fusion."
Full tracklisting:

1/ William Parker Quartet - The Watermelon Song
(originally featured on 'Raining on the Moon', 2002)

6/ The Bloomdaddies - Captain E
(Originally featured on Mosh for Lovers, 2002)

13/ Jason Yarde - Where Will it Take You
(Originally featured on www.soundjunction.org)
Posted by Babel blog at 12:09 PM No comments:

Lots of names, but many of the musicians we know and love.
First will be trioVD. With a launch at the London Jazz Festival in November
Then, in early 2010, Triptych (Richard Fairhurst, Jasper Hoiby, Chris Vatalaro); Golden Age of Steam (James Allsopp, Kit Downes, Tim Giles), Twelves Trio (Riaan Vosloo, Mark Hanslip, Tim Giles, Rob Updegraff. Yes, it's actually got 4 musicians but 12/4 = 3.)
Paula Rae Gibson. Title and format not yet confirmed.

More news soon.
Posted by Babel blog at 10:33 AM No comments:

From Butler's Wharf Pier on board a luxurious paddle steamer

Bringing the sound waves of British contemporary jazz to the currents of the Thames, the Vortex is proud to announce the start of a new venture: Vortex on the Thames.

For one special evening take-in the world famous views of London's skyline from onboard a beautiful paddle steamer.

The cruise will take place on Thursday 17th September and features two of the UK's finest jazz vocalists – Liane Carroll and Barb Jungr.

Having picked up just about every British jazz award going in the last few years, Liane Carroll has been recognised by critics and fans alike as one of our very finest jazz singers.

‘...gigs featuring singers are generally hugely enjoyable, informal affairs, and in Liane Carroll, the tradition finds one of its most skilful exponents. Humourous banter slips imperceptibly into medleys of originals, material by the likes of Leonard Cohen and Tom Waits...’ (Chris Parker).

Britain’s premier song stylist, Barb has recently returned from a sellout run at New York’s prestigious Cafe Carlyle for which she received rave reviews – ‘One of the very best nightclub singers in the world’ (Time Out New York).

She returns to play Vortex on the Thames with a stunning programme of songs featuring material from Yip Harburg to Leonard Cohen, Cole Parter to Marc Cohn.

50% of the profits will go to the Vortex Jazz Foundation, the charitable arm of this world-renowned jazz club, set up to promote jazz in London.

0.45: Steamer departs Butler’s Wharf Pier and sails under Tower Bridge up to London Bridge before returning and heading downstream towards Canary Wharf.

This will be a spectacular evening of jazz in a spectacular setting and will hopefully be the first of many great evenings of music with Vortex on the Thames.

Posted by Babel blog at 8:44 AM No comments: