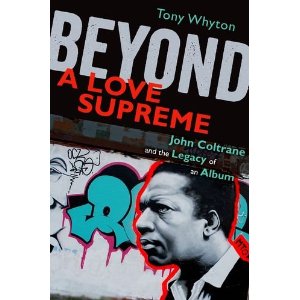 Beyond A Love Supreme is a new book by Tony Whyton the author of Jazz Icons: Heroes, Myths and the Tradition (2010). This latest offering takes on not just a John Coltrane masterpiece but one of the greatest jazz albums of all time whose importance and influence cannot be overstated. Coltrane's emergence from a dark period coincided with a heightened sense of spirituality and creativity that came together in the recording of  A Love Supreme, which explains why the work is often regarded as one of redemption.


A Love Supreme is widely considered John Coltrane’s magnum opus and one of the greatest jazz albums of all time.   In Beyond A Love Supreme, Tony Whyton explores both the musical complexities of A Love Supreme and the album's seminal importance in jazz history. Marking Coltrane's transition from the bebop and hard bop of his earlier recordings to the free jazz style perfected
throughout the rest of his career, the album also embodies 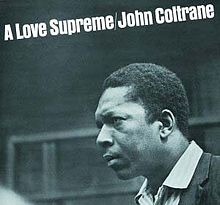 the deep spirituality that characterized the final years of his life. The titles of the four part suite—"Acknowledgment," "Resolution," "Pursuance," and "Psalm"—along with the poem Coltrane composed for inclusion in the liner notes, which he "recites" instrumentally in "Psalm," reflect the religious aspect of the album, a quality that contributes to its mystique and symbolic importance within the canon of major jazz recordings. But Whyton also shows how A Love Supreme challenges many of the traditional, unreflective assumptions that permeate jazz culture—the binary oppositions between improvisation and composition, black music and white music, live performance and studio recording. He critically examines many of the mythologizing narratives about how the album was conceived and recorded and about what it signifies in terms of the trajectory of Coltrane’s personal life. Sifting through the criticism of late Coltrane, Whyton suggests ways of listening to these recordings that go beyond the conventional ideologies of mainstream jazz practice and open the music to a wider range of responses. Filled with fresh insights into one of the most influential recordings in jazz history, Beyond A Love Supreme is an indispensable resource for jazz scholars, jazz musicians, and fans and aficionados at all levels.

“Tony Whyton has brilliantly revealed how it has become impossible to know John Coltrane's A Love Supreme outside notions of race, spirituality, history, authenticity, and nostalgia.  For me, it's like hearing the music for the first time.”—Krin Gabbard, Author of Hotter Than That: The Trumpet, Jazz, and American Culture

“Smart and engaging, Whyton's study highlights the multiple and ever-changing interpretations of Coltrane's most famous recording.  In the process, Beyond a Love Supreme serves as an important corrective to those efforts -- however well-meaning -- that might limit how we understand jazz and its people.”—David Ake, Jazz pianist and author of Jazz Cultures and Jazz Matters

Author Tony Whyton is Director of the Salford Music Research Centre at the University of Salford.   and co-editor of the Jazz Research Journal. Beyond A Love Supreme is Published by Oxford University Press.


The
wonderful
Robert Ratajczak
has reviewed a number
of Babel releases which are
in Polish but can be read using the
google translator http://goo.gl/s4uaG 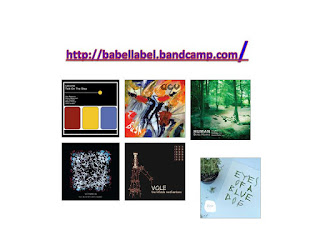 
Latest News from the Tower (May) 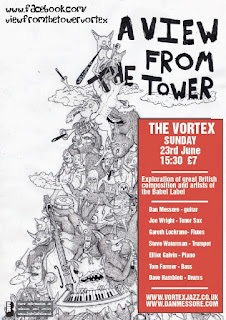 A word from Dan Messore:

Preparation for the "View From The Tower" residency are steady and underway. There is lots of exciting new music coming in from the likes of Mike Chillingworth, Dave Hamblett, Garteh Lockrane and more.
It's a real privilege to explore this collection of music with such beautiful musicians and the steadily increasing audience and interest in the project has breathed life into it's sails. These will be a fabulous series of concerts and I hope to keep expanding the potential for this project. It's a honouring and soulful learning experience to have the opportunity to work with the heritage material of British jazz. Next instalment is with Eliot Galvin (piano), Dave Hamblett (drums), Steve Waterman (trumpet), Gareth Lockrane (flutes), Joe Wright (sax), Tom Farmer (bass) and myself on guitar. Sun 23rd June 4pm at The Vortex.

The last few months I've been touring "The Bloody Ballad Of Mary Maid" a macabre Tarentino-esque theatre piece which has been on national tour and ended its run at Soho Theatre a week ago. Off to Edinburgh for August and the festival. It's a great show and it's lots of fun. I'm playing surf/rockabilly/country/ blues on my trusty Telecaster and it's been a treat to do my best Danny Gatton impression. Finger picking good.
Also, I've been heavily into organ trios recently. Especially that of Bernstein/Stewart/Goldings, John Scofields' Trio Beyond and the infamous Larry Young Unity record. I've been writing and rehearsing for a new group with Tim Giles on drums and Ross Stanley on organ and Garteh Lockrane on flute.  Finding myself in very fortunate surroundings, these guys are just awesome and I look forward to our first gig June 11th at Amersham Arms.


Indigo Kid is a project that guitarist / composer Dan Messore has run run for three years which came out of his collaboration with saxophonist / composer Iain Bellamy. The result was the birth of 'Indio Kid' based on Iain's image of Dan as a little feral country boy. For their first album 'Indigo Kid' (Babel)  2012, they were joined by Tim Harries (bass) and Gethin Jones (drums). Indio Kid will hit the road on a Jazz Services tour between May 16-27 with the Vortex Jazz Club gig marking the end of the tour. TICKETS

KATAN500: Where did you get the idea for Indigo Kid?

DAN MESSORE: Indigo Kid is a project that I've been running for 3 years now. I had been writing with the intension of combining my influences. At this time I came into contact with Iain Ballamy. He showed interest in what I was doing and we began chatting, gigging and developing my work. This was an incredible experience for me, giving me confidence to follow my heart and also focus to refine my experimentation. It became mutually agreed that we wanted to record, Indigo Kid was born. The name for the group comes  Iain's view of me as a little feral and country, it stuck! When discussing who to use on the recording, Iain introduced me to bassist Tim Harries and I introduced him to drummer Gethin Jones. Both were perfect choices.

KATAN500: Is there a new  Indigo Kid album in the pipeline?

DAN MESSORE: I was very recently in the studio recording "Indigo Kid II". The line up on this new record is Martin France on drums, Tim Harries on electric bass and Trish Clowes on sax. With Iain guesting on several tracks. I'm really happy with this new recording, advancing and evolving the concept of the music deeper into the place where it belongs. Trish has been a great presence and influence. I worked closely with Martin and Tim with the material and identiy of the compositions.  Tim and I are mixing the tracks in June and I can express how enjoyable and growing it is to work in this capacity with such an experienced musician. More on this soon...

KATAN500: When are you playing at the Vortex in London?