Babel ended 2013 with a flurry of new releases that carried on into 2014. There were the high-spirited compositions and energetic surges of SPY BOY by Brass Mask, and the sprightly melodies and Afro-Cuban rhythms of TOWER CASA by Nick Smart's Trogon. Early in 2014 these were followed by Step Wide, Step Deep, Opabinia, Parallel Moments and others. It was also the year that Babel celebrated its 25th Anniversary. In an interview with Textura to mark the occasion, the Director of Babel, Oliver Weindling  gave the following short but sweet interview.

Identity: The Babel Label was started by me, Oliver Weindling, twenty years ago. I like to call it a “jazz” label, reflectingan attitude and approach that j azz can have, in terms of pushing boundaries but without necessarily being unapproachable. That frequently overlaps with London's Vortex, where I help with the programming. Only part of this will be the traditional view of “jazz.”
Distinguishing characteristics: The label primarily reflects my taste (whatever it may be at any time). If the music has individuality, creativity, commitment and personality, with something unique to offer, then that's what really thrills me.
Proudest accomplishments: Survival for twenty years and releasing
over 120 albums. Thus helping one aspect of musicians on the scene
in London releasing their music to the world. Jack Massarik of The
Evening Standard said about Babel, “It brings to the public for
twenty years music that it doesn't want to hear.” My additional
word to that is “YET”! So all Babel releases rank more or less
equally as my proudest accomplishments.
Currently promoting: Alexander Hawkins: Solo and Ensemble, with
a new trio due next year; Dan Messore's new Indigo Kid;
Woven Entity; Whahay: bassist Paul Rogers' take on Charles Mingus;
Bourne Davis Kane (with Paul Dunmall); Sylvain Darrifourcq / Valentin
Ceccaldi / Manu Hermia; Brassmask: Tom Challenger's brass band with
influences of Haitian rara and Henry Threadgill. That's enough for
now.
Future: Continuing to survive and find exciting music.

Good things eventually come to all who wait... there's a new album by WHAHAY (Paul Rogers, Robin Fincker and Fabien Duscombes) with it's Charles Mingus inspired theme. A live performance of the album at the Vortex Jazz Club in this December received a rave review from Richard Williams who said,  The album was terrific but the gig was a monster... Unsurprisingly , The Guardian's John Fordham described the trio as on of Jazz's best kept secrets.
A second helping of Dan Messore's Indigo Kid with the title 'FIST FULL OF NOTES' and is due for release soon.This second album shows that Messore has really come into his own as a leader and composer. Bruno Heinen and Kristian Borring's came together for POSTCARD TO BILL. This was a project centred around compositions of the great pianist Bill Evans, recorded live at the Vortex, and arranged by the duo who took inspiration from Evans’famous duo recordings with guitarist Jim Hall.

Babel would like to thank reviewers who chose Babel releases as part of their best of 2014. Peter Quinn, musician and music writer, who cites Emilia Martenssen's ANA and Black No 1 amongst his selection of outstanding releases for 2014, The mercurial interplay, surging counterpoint and textural
shifts of Black Top's debut # One combines boundary-pushing improv with brilliant musicianship, while subtle arrangements, exquisitely beautiful songs and a voice of remarkable expressive depth mark out Ana, the second album from the London-based Swedish vocalist, Emilia Mårtensson.
Marlbank also chose Babel's Emilia Martenssen as #3 of his best of 20 jazz vocals for 2014. Textura  also chose ANA as #20 of its 20 top albums.
Bird is the Worm who chose Step, Wide Steep Deep as #17 of it's 30 best albums in 2014. To be included in the top 30 releases the music had to engage - elicit a cerebral connection, evoke intrigue, show personality, be different and embrace the best qualities of creativity.


Thank you for your support and wishing you all peace, love, prosperity and more in the coming new year.

News From the Tower 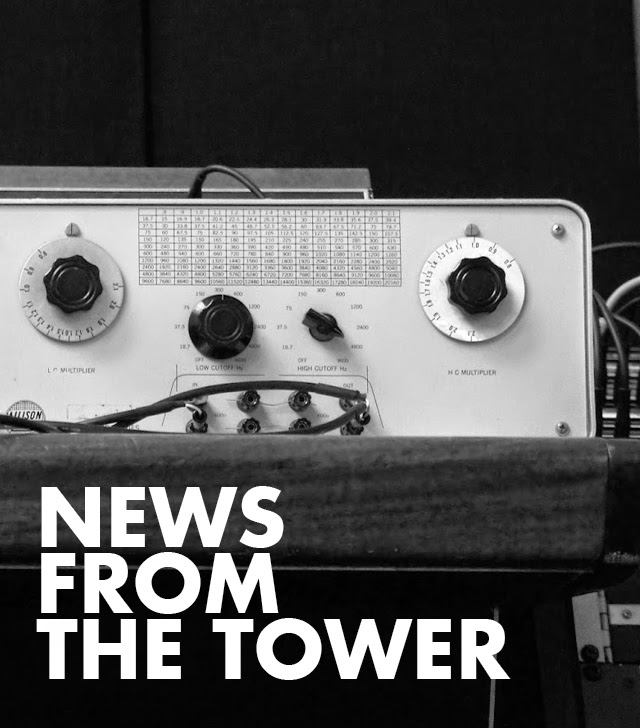 WOVEN ENTITY are: Lascelle Gordon, Patrick Dawes, Paul May and Peter Marsh. The band began life in 2010 after percussionist, DJ and multi instrumentalist Lascelle Gordon crossed paths with fellow percussionist Patrick Dawes and with drummer Paul May at various gigs and suggested the three try playing together. Soon the trio were organically evolving a brand of freely improvised music that wasn’t afraid to groove, float or tinkle. With appearances from a regular pool of guests such as Led Bib’s Chris Williams, Snorkel keyboardist Ben Cowen, bassist Peter Marsh, trumpeter Andy Knight and saxophonist Alan Wilkinson,


LASCELLE GORDON
Lascelle (often known as Lascelles Lascelle) began his musical career as a DJ at London’s Wag Club in the 1980s, where his eclectic taste made him a favourite among the punters. After touring as A Certain Ratio’s DJ, he went on to form the Brand New Heavies, one of the biggest bands of the Acid Jazz movement. Leaving the band some five years later he formed Heliocentric World, scoring a hit single for Gilles Peterson’s Talkin’ Loud label before joining indie rockers and NME darlings Campag Velocet as their drummer. From there, Gordon went on to provide percussion live and in the studio for such diverse acts as Mr Scruff, The Sandals, Beth Orton and Gossip - he’s also worked extensively with producer Trevor Jackson and with Ben Cowen as 7 Hurtz, whose collaborators include Peaches. More recently Lascelle has toured with indie popsters Le Volume Courbe, supporting My Bloody Valentine on their 2013 tour, as well as forming improvising collectives Flight and Vibration Black Finger.

PATRICK DAWES
Patrick Dawes has been working for over two decades as a percussionist, beginning his career working alongside DJs in clubs such as the Ministry of Sound. In 1995 he began a four year stint recording and touring with The Herbaliser before joining Groove Armada as their live percussionist for the best part of a decade. As well as working alongside the likes of the legendary Richie Havens as well as co-fronting quirky jazz-popsters Patrick and Eugene and recording two albums with them, Dawes has released two albums for Tummy Touch, Circus Train and in 2013, Raising Stone, a collaborative record featuring contributions from a diverse range of talents from improvising vocalist Maggie Nicols to Acoustic Ladyland saxophonist Pete Wareham and early music specialist William Summers.

PAUL MAY
Paul May is one of the most respected drummers on the UK improvising circuit. His CV includes work with the likes of Alexander Hawkins, Tim Hodgkinson, Klaus Filip and Matthias Eick, as well as working with bassist Peter Marsh in electro-acoustic improvisers Sonnamble, Elvers (with trumpeter Ian R Watson) and Found Drowned (with guitarist James O’ Sullivan) to name just three. May has enjoyed a long working relationship with pianist Carolyn Hume which has yielded several well received albums on Leo Records and led to the formation of the quartet Fourth Page. May also plays and records regularly with bluesman Duke Garwood as well as songwriter Petra Jean Phillipson.

Peter Marsh
Marsh has often been heard alongside Paul May in recent years, forming the rhythm section for a bewildering variety of improvising bands from Clang Sayne to Fourth Page to Sonnamble among others. As well as playing a more conventional role backing singer Petra Jean Phillipson, they’ve
also worked with a huge range of improvisers from Alan Wilkinson, Martin Siewert to Klaus Filip. They also record as a duo, with a debut album (Falling More Slowly) released in 2013 on Linear Obsessional. Previously Marsh also played in avant fusion band Lob, spent time depping in The
Tiger Lillies, has played a lot of folk music (from Brittany to Macedonia) and has worked providing soundtracks to films by artists including Laura Cooper and Sami van Ingen. He has played with many improvisers including Lol Coxhill, Steve Williamson, Paul Rutherford. Robert Dick, Roger Turner and David Toop to name a few. 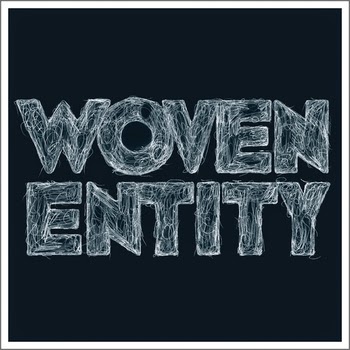 The new album Woven Entity is essentially a freewheeling expanded rhythm section, Woven Entity cook up a rich, strange brew of psychedelic jazz, electronic explorations, ethnological forgeries and unstoppable ritual grooves. Featuring contributions from guests Alan Wilkinson, Ben Cowen and Julie Kjaer, Woven Entity’s debut is a restless, playful and eclectic record that
travels a long way in its 48 short minutes, cheerfully trampling genre divisions in its path. The brief ‘C358X’ opens proceedings; flurries of exotic percussion and a woozy, sourly cosmic synth skirt round each other, much like  Sun Ra crashing an Art Ensemble of Chicago session. The following ‘Me=You’morphs somewhat unexpectedly from a bracing free jazz workout for balafon, bass, drums and bongos into a deep, insistent groove that might just lure the more adventurous listener to shake a tailfeather or two. Julie Kjaer makes her first appearance on the album with some sly, bittersweet flute, steering away from the dancefloor towards darker, more uncertain territory. ‘Naked Eye’ displays May’s uncanny ability to conjure both anarchy and order from the drumkit as he, Dawes and Gordon trade phrases over a lush backdrop of loops and drones; one second he’s coaxing squeals from a cymbal, the next  he’s locked in a metronomic groove Jaki Liebezeit would be proud of. ‘This Day Will Come’ also subverts expectations, like much of this album seems to. Birdsong, bass and balafon are joined by percussive eruptions and what sounds like someone building furniture before settling into an extended coda for fizzing electronic noise and a pair of harmonicas, underpinned by the warm thrumming of Marsh’s bass, before dying away suddenly. Alan Wilkinson turns up on ‘So Black Dada’ with a short but (uncharacteristically) sweet alto solo over a shifting matrix of metals, talking drum and jaws harp that provides one of the album’s most affecting moments. Trisssh’ (dedicated to the late Trish Keenan of Broadcast) blends minimal gamelan-esque percussion, field recordings, wind-up toys and drum machine into a slo-mo avant funk brew. ‘Hola’ is powered by a brooding, episodic groove from May’s muted kit, flecked with whistles, saxophone multiphonics, sonar bleeps and duck calls.‘Earth/Crisis’ is the longest piece by some margin. Beginning with abstract scribbles and stridulations, an off- kilter, loping afro-jazz groove emerges.Kjaer delivers progressively more heated, oblique bursts of alto before the whole shebang implodes into a primitive, ritualistic throb worthy of early 80s experimentalists 23 Skidoo. Kjaer is back on flute for ‘Who’s Who’, a humid slice of poised exotica that comes on like a stoner take on Ra’s ‘Angels and Demons At Play’. Gordon’s spectral electronics hover above the proceedings, while he and Dawes decorate Marsh and May’s locked down groove with intricate percussive exchanges. It’s astonishing how they keep out of each others way yet can apparently act as one organism, negotiating tempo and dynamics on the fly with astonishing fluidity. The album ends with ‘Moors and Orandas’, a luminous, mournful piece which promises to lead somewhere rich and strange, then thinks twice about it. Something for the next journey, perhaps.Woven Entity’s music is immersive, rhythmically infectious and eclectic to the point of uncategorisablity. All gates are open.