The superficial and the real

I'm bringing together a few disparate thoughts and hope that it gets to coherence. The argument is certainly not new, but has to be kept being reminded of.

It's always been a big debate about how to value true long-term quality and its commercial impact. Van Gogh never sold a painting in his lifetime, while there are many painters who made a short-term fortune during their lifetimes but we have forgotten them all today. I come back to this frequently.

It continues further. However, I always have had the feeling that there is enough in the system to take the occasional "risk" and think longer term. For example, my brother Paul found out that the organisation which helps refugee academics interviewed someone in 1935. Despite a comment "3rd rate mind, 1st rate violinist", they gave him support. And it was rewarded,. as the man in question was Ernst Chain who won the Nobel Prize for his work on penicillin.

For many years, I had hoped that things over here had got a bit better. Perhaps because we are a relatively wealthy society, we can "invest" in those areas which make it - and therefore us - relatively healthy in spirit.

Nowadays, however, I am increasingly worried that the system in which we live is becoming SO risk averse that people are less willing than ever to do things. Insecurity of job, or an excessive rule based world? Who knows which reason?

Examples are in the academic world, where I hear of geneticists losing their funding and wanting to leave UK. And in the world of the Vortex, where HSBC to our irritation has asked for our overdraft to be gradually reduced, the difficulties to get grants. I haven't seen an Arts Council staff member here for at least a year - and then not in a formal role to check out whether what we do is any good. By contrast, for our present festival curated by Evan, the Goethe Institut people, who helped support it, turned out in force yesterday (and of course were spoilt by us because of their generosity).

Oh and one more example. While this lovely festival was going ahead and quiet polite Mr Parker was keeping things going, King Midas Sound threw a wobbly and refused to play at Bishopsgate Institute because they weren't able to play at 160 decibels. (In my view this is like sadistically damaging their audiences' ears. A sort of GBH. I'm glad they weren't pandered to.)

On Thursday, Evan, on the other hand, had to cope in the middle of his set with a broken saxophone. He managed to repair it using some candle wax and solved his problems in 10 minutes.

I ultimately have faith in the system - Evan at least is at the level that he is at, and King Midas Sound will be forgotten about in a few years. Good quality comes to the surface. In the end. The difficulty is the need for support, moral & financial, to make it through until recognition comes. And then even that the recognition is adequate.

However, what about the chances for the new guys? Musicians who can hardly find grants. They are as patient as any. For now. And people like some of my friends who work as therapists and counsellors and now being squeezed by the system in the way it is being restructured.

Let's not throw the baby out with the bath water. Or else the fabric of our society will be lost for good.

What makes this country more worrying than, say USA, we have a culture where the government has taken responsibility to redistribute money to keep us healthy of body and spirit. Arts Council, NHS, universities etc. Now that these are cut back, they are not being replaced easily by private support - people contributing out of their own pockets to help themselves or others (such as universities, arts and so on). Perhaps we have indeed followed on from Thatcher's dictum of no more society, i.e. everyone for themselves. In the USA where everything is private, there is nevertheless a strong culture of donation to orchestras, galleries and universities. I find it mind-blowing that we have been able to get the quite radical music of the likes of Cage and Zorn, the art of Rothko and Warhol, from a country where the Arts Council is tiny and the egos of the private donors are huge!
Posted by Babel blog at 6:04 PM No comments:


Gannet’s Band members include Fyfe Dangerfield (keyboards, electronics, voice and tings), Chris Cundy (bass and contrabass), Alex Ward (clarinet), Dominic Lash (double bass) and Steve Noble (tubthumping and drums).  Rooted in the free improvisation tradition the band evokes elements from different music genres. Their debut album ‘Transmissions of Not’ will be available for £15 in a deluxe heavy vinyl packaging with gatefold sleeve featuring original artwork by the band itself. Each copy also comes with a CD with extra tracks. The official date of release is April 2012, however you can check it out on bandcamp
http://babel-label.bandcamp.com/album/transmissions-of-not
The ensemble is performing at The Vortex Jazz Club  http://www.vortexjazz.co.uk/ 1st February 2012. 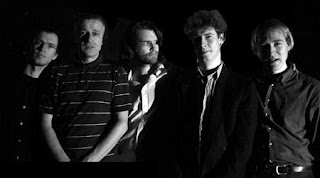 Babel upcoming at the Vortex up to 1 February 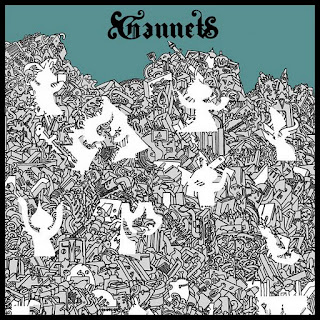 A few gigs at the Vortex over the next 10 days:
Paul Clarvis/Alcyona Mick duo downstairs on Wednesday early evening. FREE!!
Hans Koller with Sandra Hampel and 10 piece band, as part of Evan Parker's Might I Suggest festival
(Friday)
Hans Koller with Gerd Dudek (Sunday)
The Gannets (1 February) with Fyfe Dangerfield, Chris Cundy, Steve Noble, Alex Ward, Dom Lash
Posted by Babel blog at 10:31 AM No comments: 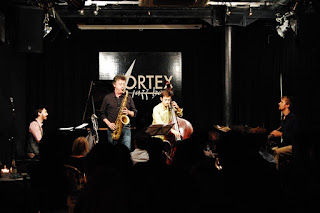 Album Launch - Dialogues Trio with Julian Siegel. We celebrated the arrival of the CD at a packed Vortex in September (as shown in the above image). It would be great if you can now come and join us for our album launch on 19th January at the Vortex Jazz Club.


"Twinkle Twinkle is an absorbing set of variations and improvisations.
Bruno's trio explore the music with skill and invention and Julian Siegel's ingenious performance is superb.
An excellent achievement." (John Taylor)

Hope to see you there...

If he's feeling up for it, then Kenny has promised to turn up. A nice bonus.