Two new Babel albums are previewed at the Vortex tomorrow. Twelves - Riaan Vosloo, Tim Giles, Mark Hanslip and Rob Updegraff - and a duo of Mark Hanslip and Javier Carmona.
Come along. Please. It'll be great!
Posted by Babel blog at 11:37 AM No comments: 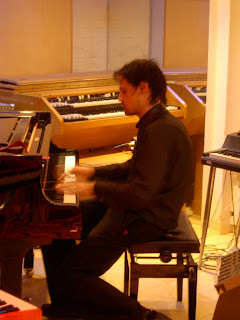 Acoustic Ladyland is reaching the end of its life. Falling on its sword is a route chosen by Pete Wareham himself (above shown at Eastcote Studios during the recording of remarkable Last Chance Disco). Last night was an exceptional pleasure as the band returned to the Hendrix music of the first album Camouflage.

Hearing the band yesterday indicated how masterful they have become, since the band's first gig at Ronnie Scotts on 10th September 2001. Not just their consummate skills being once again focussed on the music,  with which they started but their imaginative reworking during their own solos, and their empathy. I can't guess how many gigs they have played together, and also that rhythm section of Tom H and Seb (also playing in Polar Bear of course).

A very moving week is evolving. Tonight is Last Chance Disco - actually the first music played properly in the current Vortex in early 2005. While tomorrow ends with the current band.

To have been involved during this early period by releasing Camouflage and Last Chance Disco on  Babel has been a privilege for me.

So it's great, and unsurprising, that the gigs are sold out.

But there is one thing that really indicates a certain state of the media world vis-a-vis jazz (or perhaps music in general) at present. There were previews, of course. But there has been NO press to write up and describe the importance of the evenings. And of course no radio or other similar media. Contrast if it were the last performances of many other rock bands, or the last performance by a diva at Covent Garden. Well, it's their loss and the world's loss. In the mean time, let's just go and enjoy the party.