View from the Tower is a monthly residency at the Vortex Jazz Club exploring the work of British composers while bringing together artists on Babel Label. It is curated by guitarist/composer Dan Messore who got the idea while working on his own album. New compositions and the reinvention of older ones play a huge part in this exploration by some very fine musicians. Performing this month are: Trish Clowes (saxophone), Elliott Galvin (piano), Dave Hamblett (Drums), Gareth Lockrane (flutes), Dave Manington (Bass), Rory Simmons (trumpet). 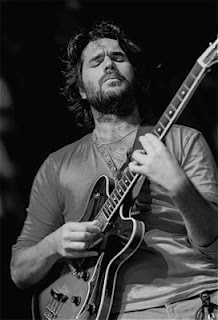 The works for this month include:

In Messore's words:
'This months selection comes from an on-going collection of music from British composers. Each month I'll be adding new arrangements (from myself and other band members). This months pieces are chosen to cross a broad range and showcase the beginnings of a growing pad. In the future months we have compositions from Kit Downes, Gareth Lockrane and Keith Tippett, to name a few. As the collection grows we will theme the events to look at different eras, instrumentalists, concepts and so on.
Hermetology is  Iain's ode to the legend Hemeto Pascoal. I have been fortunate in turn to work Iain on my Indigo Kid project. Its a great tune, and I like it in the set as part of the jazz heritage of inspiration from both artistic output and direct contact and well versed. In terms of composers associations to their work, Trish Clowes' The Master and Margarita is inspired by, and in response to, the book by the same name by Mikhail Bulgakov. Again, I enjoy this passing on of inspiration.  Both of these musicians have been pivotal and inspiring in my musical growth.
Huw Warren's piece Sheep is a great little tune to show the depth of Huw's musicality. It's testament to making the complicated simple, rather than the reverse. This is the first of several of his pieces that I hope to include in the collection. All his compositions have this deep musicality which are brilliant vehicles for improvisation and group interaction'.


Congratulations to Lleuwen who won the Liet International (Eurovision Song Contest for the minority languages of Europe). The winning song sung in Breton was Ar Gouloù Bev, (The Living Light). Lleuwen collaborated with Huw Warren (pianist/composer) and Mark Lockheart (saxophonist/composer) in the making of DUW A WYR (God Only Knows) an album of Welsh Hymns in 2004, which was well reviewed and gained much media exposure on radio and TV in Wales, including a S4C documentary about the making of the album. Ollie Weindling remembers the recording sessions well. 'Huw Warren was musical mentor to Lleuwen. They set a standard for voice, saxophone, piano trios. Possibly one of Babel's finest hours, in my view. Her passion is undoubted...'.

The Rich Taylors is a merging of Blink (Fincker, Clarvis and Mick) with The Mediums (Fincker, Courtois and Erdmann). Robin Finker is the catalyst, through playing in both bands. Along with projects such as Barbicana  (http://towerofjazz.blogspot.co.uk/2012/12/barbacana-review-culture-jazz.html) and Tweedleedee, which are funded through a scheme called Jazz Shuttle that supports French and British musicians playing in both Britain and France. The Rich Taylors are in effect 'sponsored' by the Vortex Jazz Club and Banlieu Bleues in Paris. The Vortex gig will be the culmination of two days of rehearsals with a focus on the music of Vincent Courtois, who is perhaps one of the most in-demand cellist around. This will be his first gig in London since he played at a Loop festival held at the Vortex where the live CD Twice was recorded on Babel Label.


Tickets for the gig are available here: http://www.wegottickets.com/event/200152