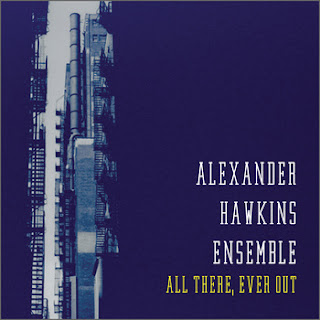 In the powerful free music trio ‘Decoy’, Hawkins plays Hammond organ exclusively. Here he plays acoustic piano on all but one track, while guest Kit Downes on Hammond B3 doubles Hawkins’ piano on another.
All There, Ever Out was released last year, but is far too good to pass over for review. The ensembles’ second album in as many years, following Song/Dance (Clean Feed, 2010), it marks them out as one of the most vividly distinctive in contemporary jazz.
The first two tracks, “Ologbo (Double Trio)” and “Tatum Totem III”, make the most of pairings: drums and marimba, and bass and cello respectively. The initial impression is something like Eric Dolphy’s Out to Lunch, if re-arranged by Charles Mingus. The give-and-take between Marshall and Lash is essential. They give the ensemble a rich low end without locking it down, while the percussionists give the music both its drama and its bounce.
The brief track on which Hawkins plays organ, the curiously-titled “AW/LJ (Differently)”, is delicate, but with a reined-in tension, the Hammond’s muggy slithers and whorls unsettled by Carmona’s disruptive percussion and unsettling cymbal-scrapes.
“Ahab” invokes the same stumblebum drunk celebrated (if that’s the right word) in Eric Dolphy’s “Straight Up And Down”. Tom Waits, I think, would just love this. But this drunk is heading home on a stormy night. Hawkins’s piano is buffeted by bass hits and whipped along by tempestuous percussion until Fischer’s guitar cuts in and nudges the ensemble back on course.
“(Untitled Free Improvisation)” is a nice slice of freedom. A whole album like this would be fine, but here it’s just a quirky interlude. It does, however, witness the ensemble settling quickly into a fine equilibrium, and it’s interesting to hear the various ways in which, free of compositional structures, they tug at each other. The performance finds its shape in a wonderfully unpredictable conclusion.
“Marta”, composed by guitarist Fischer, is a slow number that arrives at a curiously stately theme via a series of tense disjunctions. It contrasts nicely with the following “Elmoic”. Titled, I guess, in honour of Elmo Hope, this begins as a solo for Hawkins with a Monkish bebop swagger (indeed, Hawkins quotes Monk’s “Hackensack”, though the ensemble development of the melody suggests the Bill Frisell Band version rather than Monk’s own). Fischer’s clean guitar and Robinson’s dry-bones marimba over Lash’s bass thump add to the alt-vintage feel.
Set-closer “So Very, Know”, is a somber meditation, with electric guitar harmonics radiating from Kit Downes’ introductory Hammond lour. Hawkins’ piano, when it enters, lifts the baleful mood they’ve established into something more expressively introspective and elegiac. The track is a curiously downtempo and affecting conclusion to an otherwise exuberantly idiosyncratic set.
http://www.thejazzmann.com/reviews/review/all-there-ever-out/

Here at babellabel we have been busy. Three new albums available on bandcamp http://babel-label.bandcamp.com/ prior to their official release.

Talk on the Steps