Oriole at the Vortex tonight!! 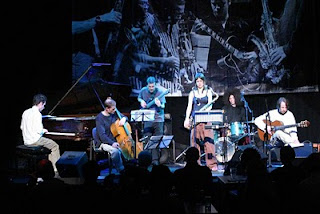 A last minute change in the programme, as Oddjob couldn't be there. Jonny's in London, so we've taken advantage of it.
8.30 till 9.00 - Julia Biel - Piano and Vocals

Plus Special Guest
Julia Biel - Vocals
Tickets £8
Call 020 7254 4097
www.vortexjazz.co.uk
"music that is quietly intense, beguilingly beautiful and full of pleasingly robust tunes that stay with you long after you hear them. Expect waltzes, gentle samba, persuasive grooves, poignant themes and uplifting melodies that'll make you smile, think and want to dance.” - Timeout
Posted by Babel blog at 8:58 AM No comments:

Great to have Django at the Vortex and such a packed house. Deservedly garnering 5 star reviews such as John Fordham in the Guardian. I was especially pleased by his playing of This World by Iain Ballamy. First because I love his ballad playing most and his focus on the piano.
But also because the recording of All Men Amen, where this was performed, was a turning point in my move to have a record label. I prodded Iain to take advantage of Peter Schulze's kind offer of recording at Radio Bremen and then recall how I did the classic jazz record label producer thing. The band flew out leisurelly on the day before, while I had to schlepp all the gear, from a Human Chain gig in Southend, by van. Arriving knackered (albeit after breakfast in Bruges and lunch in Amsterdam), having just had 3 hours sleep on the ferry, the band dragged me off to dinner. And then it was off to the studio to record what, for me, is Iain's magnum opus. So sad that it isn't more widely available, having come out on the B&W Label.
(It only goes to prove that there are certain rights that musicians need to have over their music that labels greedily retain.) Though I notice that you can buy it from Jazzcds here. So do it if you have a chance.
So hearing that gig on Tuesday, along with the others recently - and being reminded by Tom Cawley that Curios wouldn't exist were it not for the encouragement of the Vortex - is what makes me proud to have a part in this scene.
Posted by Babel blog at 8:57 AM No comments:

What if the government cut funding for jazz?

If the government cut funding for jazz, what would it do for jazz gigs in London?

Certainly next to nothing for the venues such as Vortex, 606, Ronnies, Pizza Express. As we are all unfunded! Of course it might limit the chances for the Vortex to upgrade its facilities. But we all work on the system that it's a permanent recession for jazz (Thanks for Billy Jenkins for pointing that out to me very soon after starting Babel.) Similarly for the record labels, who are more limited by the music industry situation than the official funding.

By contrast, it could easily affect bigger gigs at the major venues, and the core of the London Jazz Festival.

But the proof of the pudding will be in the eating after the election.

Someone should be asking the parties for their jazz policy. They did this in Germany and got a commitment from all of them that jazz support would not be reduced. When I've asked journalists, mags and blogs to ask them, they laugh at the thought of even posing the question because they don't expect an answer.
Posted by Babel blog at 12:38 PM No comments:

Stuart Nicholson has a go at blogs

In the latest Jazzwise, Stuart Nicholson has a go at blogs, generally regarding them as amateur and not properly "peer reviewed". So does that mean that I shouldn't take any notice of the erudite blogs of Ethan Iversen and other musicians, or the journalists here in UK, such as Peter Bacon's Jazzbreakfast, Mike Butler, Londonjazz? Not least the writing of Chris Parker on the Vortex web site.
Of course there are some bad blogs out there. But also some good ones too. And with the reduced opportunities to find out about jazz in the mainstream media, and the changing face of information dissemination it's essential.
I can't be bothered replying in the form of a letter.
I prefer to answer in the form of my blog. Much more appropriate.
Now. Much more intriguing is how things are moving in regard to Myspace (which I hardly look at nowadays apart from a few specific bits of music to hear), Facebook and Twitter.As well as where it's going to be able to hear so much jazz via the shops.
Posted by Babel blog at 9:07 AM 3 comments: